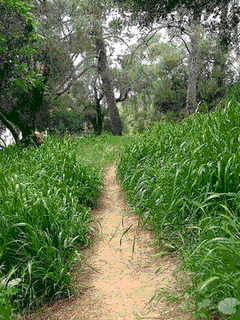 Ah, another rainy day. And they say it never rains in southern California...

Not that I mind... I used to really really really hate the rain, I thought it was ruining my fabulous fur coat and would avoid it pretty much always. That made it fun for mom and dad to have to take me out to do my business... them running hysterically trying to coax me outside, the rain indeed making a mess out their own furry pelts, and me refusing to go until the very last second, running to do my "doo-ty" then running back inside until I was just under a part of the building that kept me dry. Then stopping. Then looking at them. Then watching them plead with me to come inside.

The looks on their faces was always priceless. I'd let them hang in the wind for a few minutes, maybe look around to survey the neighborhood (as I said, I wasn't getting directly rained on so I was fine), then slowly strolling in once one of them had to leave the safety of the rain-free area to come and get me.

But today before the skies opened up, I had a little chance to run in the park. And we played a fun game of "Where's Bogart?". Well, fun for me that is. It apparently drives mom crazy when she turns around thinking that I'm right behind her and I'm actually off somewhere investigating something tremendously important.

See all of the "Where's Waldo" (ahem, I mean Bogart) pix on my other blog:
http://www.toaireisdivine.com