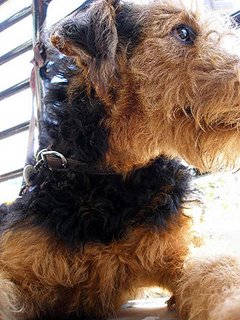 Damn I'm getting big. I'm just shy of 8 months old and already 57 pounds according to the vet. All big burly manly muscle, I say, it couldn't be that I'm carrying several extra pounds of hair around with me or anything like that...

While we were waiting for the results of yesterday's fecal flotation test (I know what it's called because mom and dad keep saying it over and over in a stupid voice, for some reason they think that's hilarious) mom decided that we should go to the Corner Bakery for a little lunch. Excellent idea mom. I get to watch the people going by and relax with a cup of water.

Afterwards we decided to stop in Griffith Park for a little walk - you know, for the humans to walk off their big lunch and for me to find a little action. Well, there were huge trucks with lots of people around, mom said they were making a movie, and they didn't want us to get too close. They had tanks and a fake moon and were running around in NYC policeman and army uniforms. Bizarre the things these humans will do. So dad decided to pose me nearby so everyone could see who the real star was - while I am undoubtedly adorable, I just wasn't in the mood and only stayed still for a moment.

Mom called several times today to find out how my poop was, but alas, no answer today. Perhaps it was the complexity of the ingredients or the richness of the aroma that delayed the results... I should know tomorrow what is irritating my innards.

See all of the nail-bitingly exciting photos on my other blog:
http://www.toaireisdivine.com

i am so glad i found your site! i am getting ready to purchase an airedale this august. i have been searching for other site. there are plenty of breeding sites, but was struggling to find the everyday airedale sites.

any airedale advice for me?

Bogart Handsome Devil here.. so glad you found my blog! Congratulations on your choice of the finest breed on the planet... We are a stubborn bunch, very headstrong yet playful, and we all seem to have a fondness for shoes - your shoes that is - especially ones that you particularly like, so I'd suggest hiding those first. Take a firm hand with your pup from the get-go and you will have a companion that you can teach and that will teach you a thing or two sooooo easily. Yes, we're THAT smart. Feel free to drop by anytime (or on my other blog, www.toaireisdivine.com - I have a message board there too) and don't forget to share pictures when your new little Airedale terriorist arrives!!!