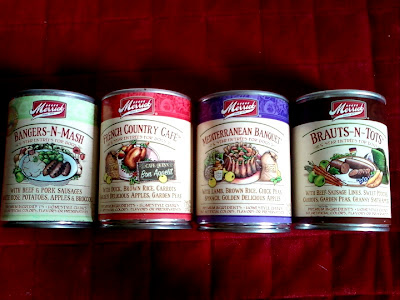 With the Olympic Opening Ceremonies happening RIGHT NOW, mama and I got inspired.  Partially because of mama's recent laziness in making my chow, and partially with the Olympics on our minds, we went to the dog store and went international. 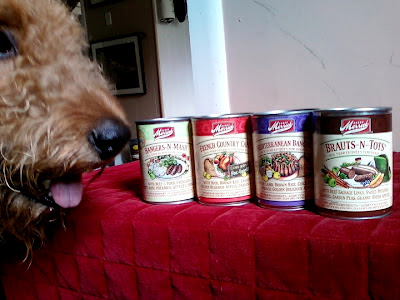 Yep, I've got Bangers and Mash, French Country Cafe, Mediterranean Basket, and Brauts n Tots.  But I think the one that I should try first is the most obvious: 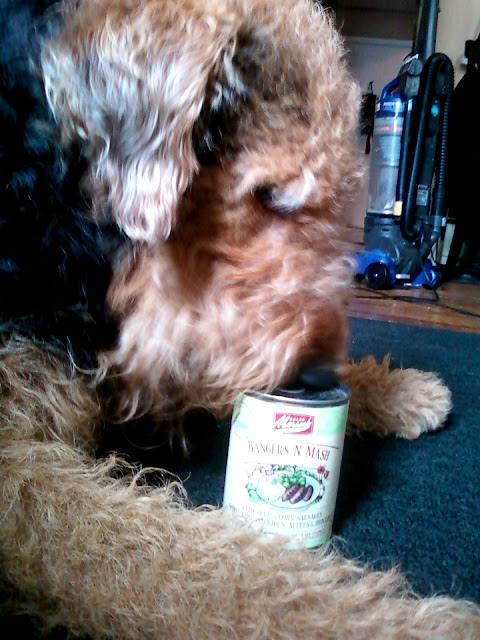 Bangers and Mash of course - as a tip of the hat to the host city.  YUMMO Twas a Dark and Stormy Night 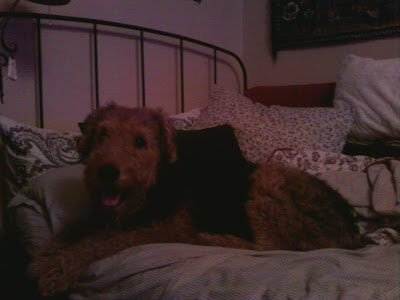 Storms were rapidly rolling across the horizon, heading in our direction.  The crack of the mighty thunder sent me into a frenzy.  The constant white-hot peals of lightning sizzled across the sky, lighting up everything like a giant light bulb.  Rain pummeled down upon us, finding its way inside through miniscule cracks in the window.  Mama was nervous.  The cats had abandoned us for the relative safety of the closets.

And what did I, Man of the House, do in this situation?

I PROTECTED THE BED

To the untrained eye it may seem that I was cowering, cuddling deep into the mass of pillows and covers.  But that wasn't true.  The bed needed to be protected.  I was just using my entire mighty body to do so.

Oh Ricki, You're So Fine

You're so fine you blow my mind, HEY RICKY! 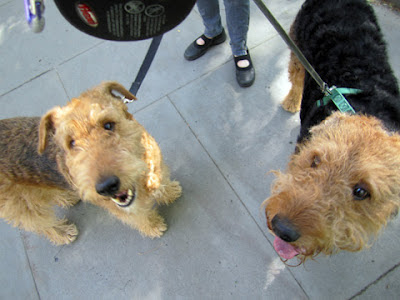 You make me all wiggly whenever I see you pretty Airegirl! 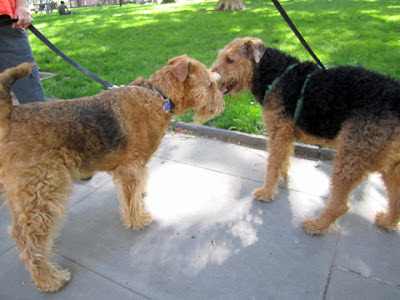 Not only are you beautiful, but damn if you don't SMELL AWFULLY GOOD 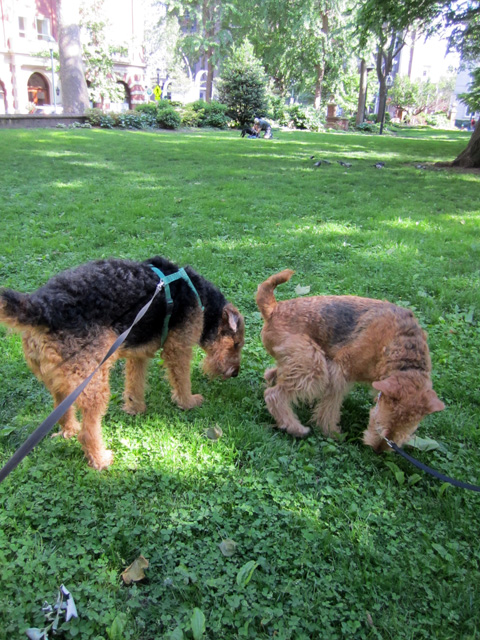 Yes, I will follow you anywhere.  All around the park.  Up and down streets large and small. 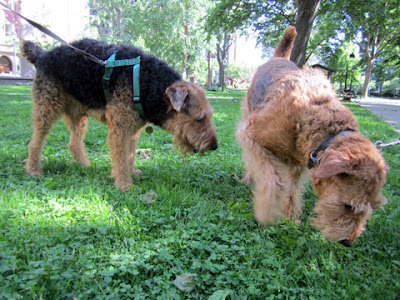 Yup, you make me feel like a real Aireboy.  Manly, muscle-y, and musky.  We really must see more of each other! 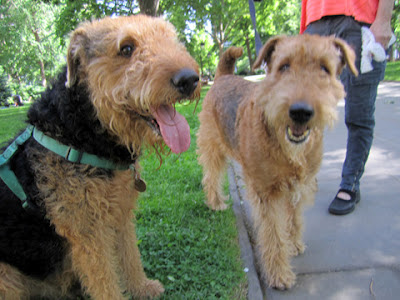 A kiss until next time... 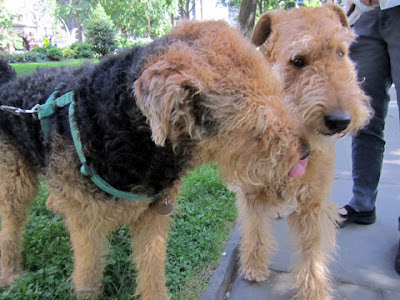 Wanna help rescued Airedales? Wish you could donate some $ but a little short this month? YOU CAN STILL HELP! 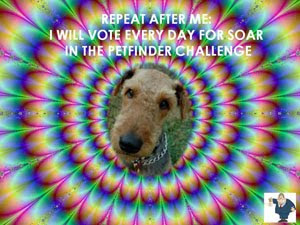 Airedale enthusiasts have banded together to benefit SOAR (Starting Over Airedale Rescue) in the Shelter Challenge.

You can vote every day on every browser and on every computer using the links below. Click on each link, type "Airedale" in the Shelter name, "Michigan" (MI) in the State and hit Search. SOAR will come up. Click “Vote”, type in the Captcha code and that's it! Click on the purple button at the end to give food and care to shelter animals in need (The Animal Rescue Site gives away a lot of money to animal charities! Support 'em!), and they have cool stuff for critters with paws and critters without paws.

My furry little buddy has passed away.  Behemoth, how I will miss you. 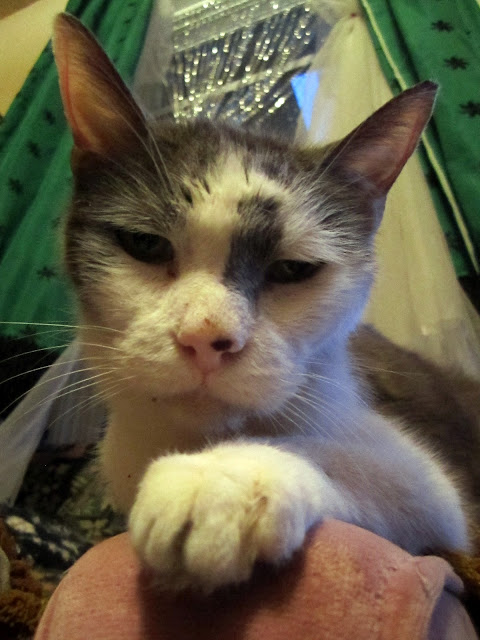 I know that you haven't been well for awhile, and we did all that we could without going to invasive, painful extremes.  You put up with me shoving that syringe full of medicine down your throat twice a day when you weighed only 4 pounds.  You impressed everyone at the vet's office with your spunk and spirit - no one was willing to count you out or give up on you and they all knew who you were.  We all knew that your body was fragile, but your spirit was huge.  And no one more so than Bogart... 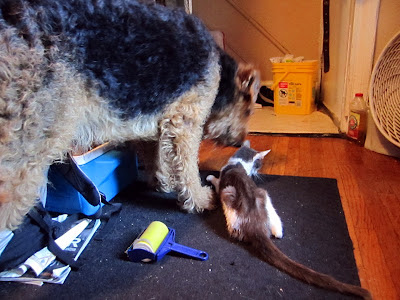 You raised Bogart from puppyhood - made him into a cat-loving (and respecting) dog.  I will always be grateful for your input into his education.  And I will never forget one of the funniest things that I have ever seen in my life - when Bogart was about 3 months old and you were trying to teach him some lesson with your mighty paw, which got stuck in his mighty moustache and then seeing the two of you run at top speed through the apartment.  You meowing like crazy as you were pulled along, claws caught in the 'stache, him barking and running in all directions.  I'm sure you didn't think it was as hilarious as Klaus and I did, but I thank you for that incredible laugh. 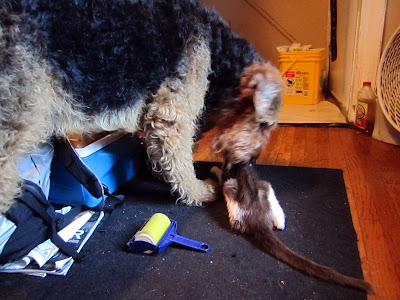 And I thank you for your calmness, your kindness, and your willingness to greet any and everyone who entered the door of anyplace we have lived.   The way you would sleep on my hip after Klaus passed away.  Your insistence on a certain brand of indoor dry cat food.  The way you could jump straight up in the air with the greatest of ease.  That incredibly long, soft tail.
It was an agonizing time in your last few days - but I think we are all happy that you were allowed to pass away at home.  You left us while we were asleep, I hope that you just went to sleep too.  Bogart kissed you and tried to nudge you awake after you were gone, and then he wouldn't let me put you into the box to take you to be cremated.  He barked and barked and guarded you.  The other kitties and he all got a chance to kiss you goodbye - and they all knew. 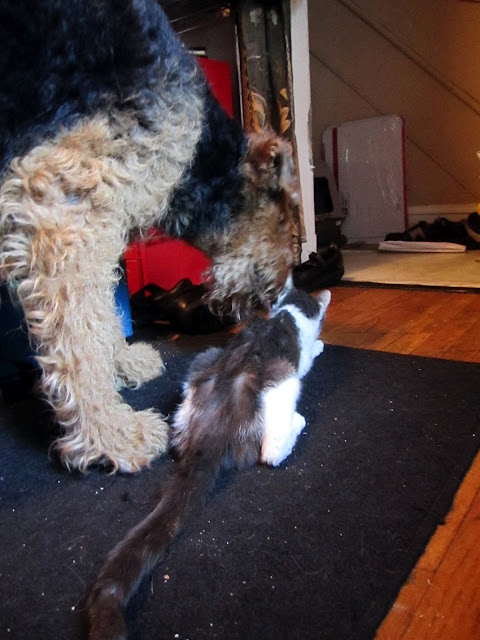 Many people who didn't know you assumed that you must be a giant, fat cat with a name like Behemoth.  But of course, nothing could be further from the truth.  You were not named for your size but more for your attitude, after the character in the novel, The Master and Margarita:
An enormous (said to be as large as a hog) black cat, capable of standing on two legs and talking. He has a penchant for chess, vodka and pistols. In Russian, "Begemot". The word itself means hippopotamus in Russian as well as the Biblical creature. A demon in disguise, able to take human form for short time. (from Wikipedia)
Yes, you were not a black cat, but a grey puss in white boots.  A gutsy street cat, you wandered into our lives as a kitten with teeth like a hillbilly vampire and every type of worm that a cat can have (and probably some that cats really, really shouldn't have).  A tail as long and sinuous as a whip.  And the insistence that an entire slice of pizza is a fitting meal for a cat.
You were Klaus' favorite - he always said, "This is my cat".  And you know he didn't like cats (on the outside).  Many hot afternoons were spent in Los Angeles with Klaus sleeping on the couch on his side and you draped over his hip like a kilt, front paws fully akimbo, both of you snoring.

We will miss you tremendously. Sleep well, sweet boy.
Lulu
Posted by Bogart H. Devil at 1:02 AM 6 comments:

So... this heatwave thing stinks  This humidity thing stinks.  It's way too hot here in Philadelphia.  If only there were a place that a boy could get a tasty cold drink... 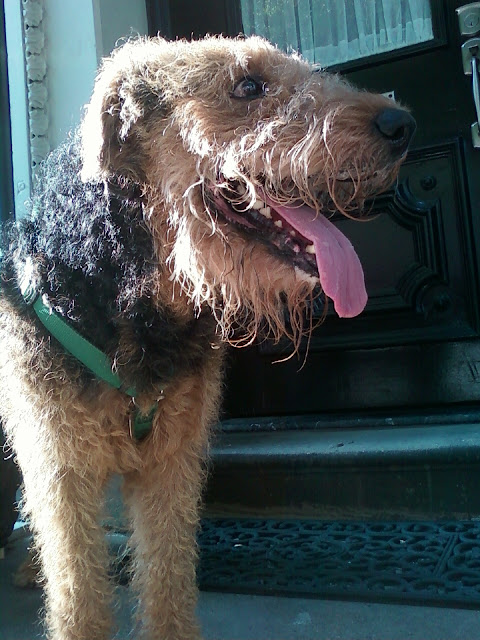 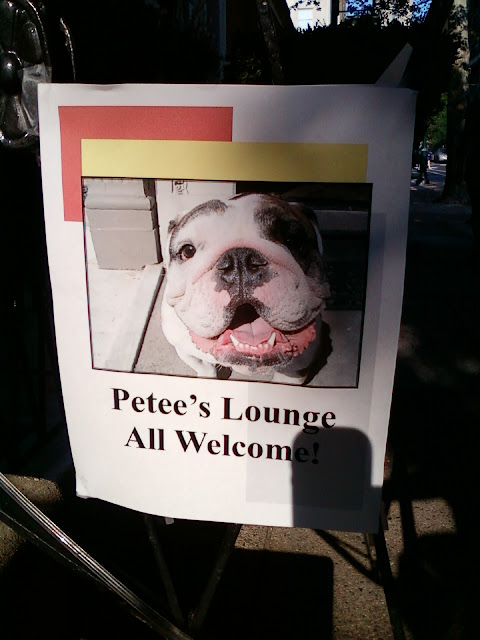 While I have seen water bowls scattered around the city, this was the BEST: 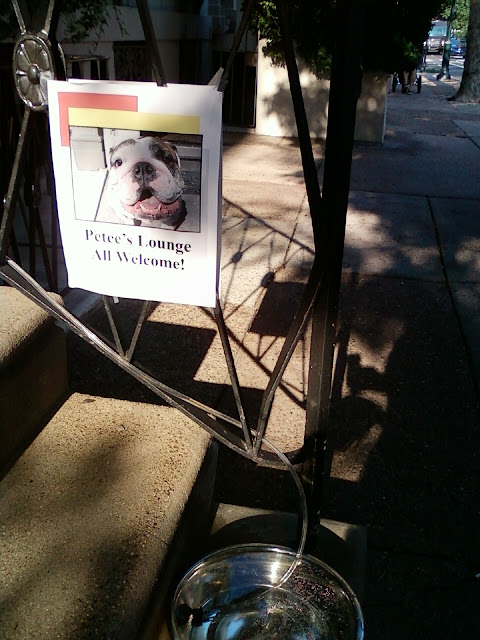 Yep.  This wasn't your ordinary stale-stagnant-half-empty-kinda-gross water bowl.  No siree.  This one had cool water flowing down from inside their house to replace the water that us fine fellas are drinking.  GENIUS 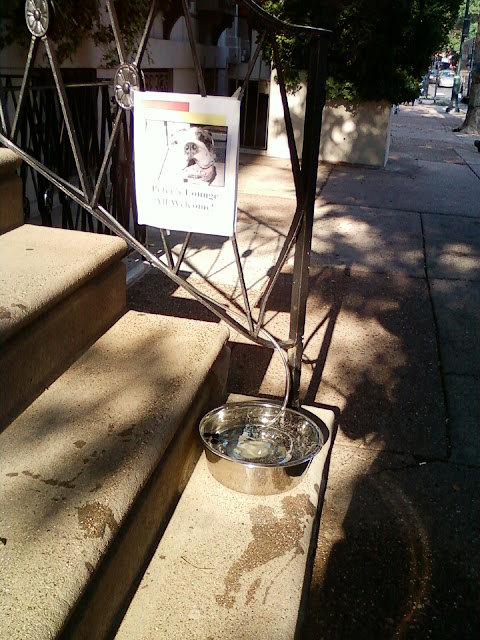 Thanks Petee!  And Petee's dads!

Find yourself out on a walkie on a stupidly-hot day like today?  I've got a great tip for you: 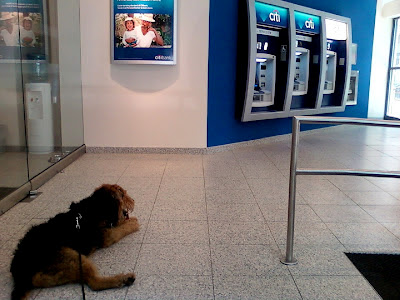 Whenever you get just too damn warm, hit the ATM.  Pretty much any ATM will do.  In my experience, they're all super-aire-conditioned, and most of 'em have tile floor. 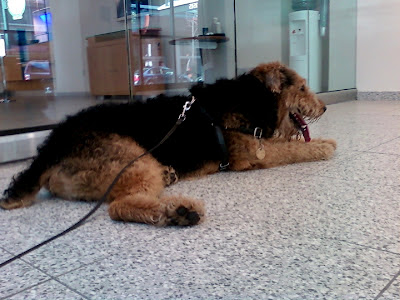 Maybe your mama is like mine - not much reason to visit the ATM.  Something about me earning some cash so that we can visit the ATM more often (blah blah blah). 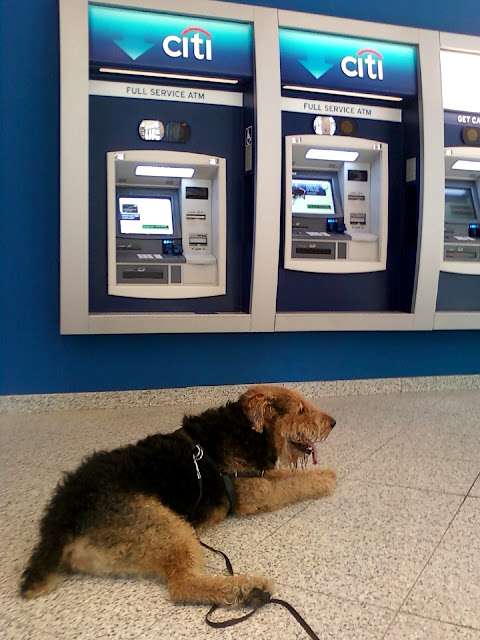 Friends, I GIVE YOU A REASON.  It's hot.  It's humid.  Hell, it might even be dangerous.  HIT THE ATM 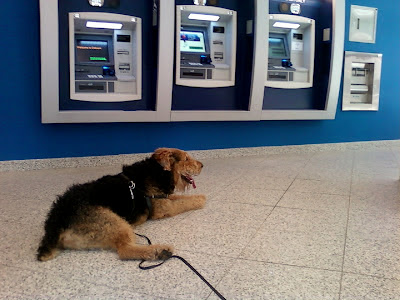 Remind your dad or mama to bring that ATM card with you on your hot-weather-walkie.  They don't have to take any out (it's just to gain entry to this oasis of cool, breezy happiness). 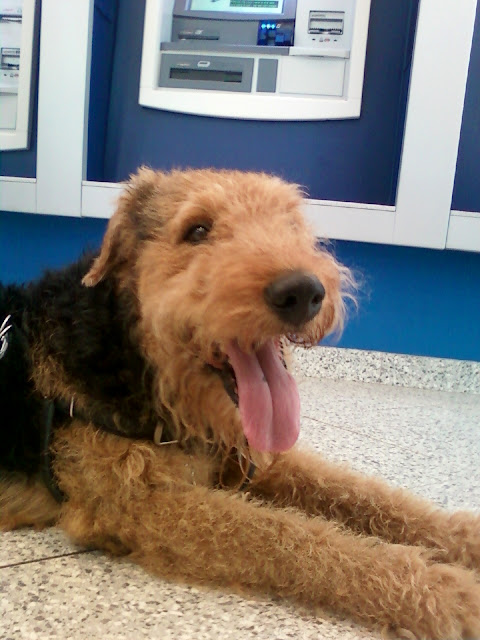