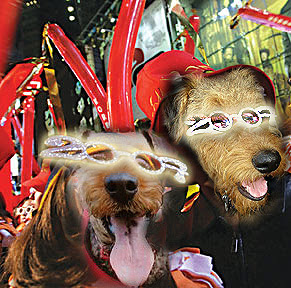 Well 2007 started off with a BANG for me last night... at exactly 12:00 mom and I were watching the ball drop on TV and then B-O-O-M - the shooting started. Yes folks, here in Los Angeles people actually shoot guns into the air to celebrate stuff. I was only starting to get my head around the idea that humans are stupid enough to play with those nasty fireworks-things and now this. Luckily mom had anticipated this, and took me out for my last peepee walk at about 11:45. And even more oddly - the shooting was one of the only things that the folks here in Los Angeles do on time.

So of course mom wanted to take some photos of me in front of the television - watching that giant shiny ball slowly move down toward Times Square, but NO - guess what the excuse is now? Somehow - IN THE HOUSE - mom has managed to lose the memory card for the camera. And somehow - AGAIN - the camera's internal memory has started to malfunction so that it can only be usable with the memory card. That she lost. In the house. Did I mention we live in a small apartment? That she somehow lost it within a room or two? Hopefully she'll remedy this little situation soon... it will be worth her while of course, I won't force her to sit at the computer creating these lovely Photoshops - which will free up some time for her to work on some memory exercises.

In the meanwhile, I had mom put together this picture - sort of a "dream date" as it were - of me and Miss Sunshade together in Times Square for New Years Eve 2007... no, I have no idea why she chose this particular photo with the funny hats and the funny 2007 glasses on the people, ahem, I mean on us...

To Aire is Divine

Happy New Year, Bogart. Glad to hear you and your mom survived the stupidity celebration shooting in LA. We look forward to more adventures in 2007 ... assuming someone can find the memory card.

Well heck Bogey - can't you retrieve it for your Mom?

Bogie Bogie, I had the bestest time at Times Square with you... You covered my ears while the loud horns were being blown and fireworks were being set off, but then you started shaking and panting yourself....

You're such a gentleman *blushing* , I had a great time with you!

It looks like you guys had a awesome time! Love the pic! Great job!

No need for the memory card when your mum can make a pic like that!!! Hopefully she will find it one day in 2007..

PS. Are you sure you didn't ate that memory card Bogart???

Happy New Year, you handsome devil!
Looks like you & Miss Sunshade had a fantastic-terrierific time watching the ball drop!

Hey Bogart. That's a really cute poster of you and sunshade. You guys must have such a great time. :)

Dear Bogie, as always, I have tagged you for the New Year's Resolution tag!

Looks like you and I are in love with the same gal! you've got good taste my man!!
heheheheh!

happy new year bogart! for a moment, i'd thought you were cheating on miss sunshade with another doggie girl! anyways, silly me. it happens when i'm only half-full.

Maybe your Mom should check your poop for the memory card. Heh.